In December 2017 a completely new style of cellar door opened at the d’Arenberg Winery in McLaren Vale. This was no converted old stone building or a new building made to blend in with the vines and landscape. This was the d’Arenberg Cube, built to stand out and grab attention! I wasn’t sure what to think of the Cube when I first saw it. I don’t think beautiful is the right word, in fact I am sure some people might call it an eyesore. After finally visiting the d’Arenberg Cube what I can now say is “You really need to go and see it for yourself!”

Where is the d’Arenberg Cube?

The d’Arenberg Cube is located on the site of the d’Arenberg Winery in the McLaren Vale wine region about one hour south of Adelaide in South Australia.

The best way to get to the d’Arenberg Cube is to self drive, but if you do not have a car there are some other options too.

Need a rental car? Click here to compare many companies in one search

Many wine tours to McLaren Vale from Adelaide will visit the d’Arenberg Cube, including the popular hop-on hop-off bus.

It is possible to get to McLaren Vale itself by public transport, but as the d’Arenberg Cube is a little out of the centre of town, I would not recommend this method to visit unless combining it with a taxi ride or a local pickup on the hop on hop off bus mentioned above.

If you do wish to use public transport, catch the train from Adelaide train station to Seaford, then swap to either a 751 or 752 bus. For more information and trip planning go to the Adelaide Metro website.

A Little About d’Arenberg

Established in 1912, d’Arenberg has been owned by the same family ever since. Now in it’s fourth generation, it’s Chester Osborn who is at the reins and the Cube is Chester’s idea.

d’Arenberg produce a wide range of wines, both red and wine, with most of their grapes coming from the McLaren Vale region where they have 450 acres of vines. Some of their vines were planted as long ago as 1840, making them some of the oldest in the world. (Due to it’s geographical isolation, South Australia was never a victim of the phylloxera epidemic that destroyed many old vines around the world and other parts of Australia. So even though its a young state, only settled in 1836, it has this distinction of some of the oldest vines in the world)

While d’Arenberg produces the shiraz and cabernet sauvignon that the McLaren Vale region is known for, it also grows many other more unusual varieties of wine, both red and white. It has won numerous top wine awards over the years, and is considered to be one of the top wineries in Australia. The huge Dali statue out the front of the cube

In 2003 Chester Osborn came up with the idea of building a cellar door with a difference. He had travelled widely through Europe and thought that something distinctive was needed here. The Rubik’s cube-like design was inspired by the puzzle that is wine-making.

Once started it took three years to build the Cube, and finally in 2017 Chester’s vision was a reality. It has since been called things like “Chester’s Folly” as it really is a tribute to his own quirky style and tastes, but by it’s popularity, it seems to appeal to many more people too. I would personally say it’s the main drawcard for a visit to the McLaren Vale region.

The d’Arenberg Cube is five stories high. Here I will walk you through each of them.

The quirkiness begins the moment you walk in the door – or rather, it begins outside, but I will get to that later. The Alternate Realities Museum is filled with contemporary art curated by Chester Osborn himself. There are all sorts of displays here from paintings and Osborn family artefacts to a 360 degree “multiverse” playing a video of alternate realities. Some of the paitings in the Red Painting Gallery Some of the memoribilia from four generations of winemakers This is the Fruits and Flowers room where many aromas associated with the wines are available to smell.

Yes, the kitchen and toilets have a whole floor to themselves. It doesn’t sound so interesting, but it’s still worth a short stop because of course nothing is boring in this building. Spend a few minutes watching through the glass wall at the kitchen staff carefully assembling some of the beautiful plates that make their way onto the restaurant tables. And then do duck into the toilets, because the quirkiness continues there. The walls are covered in murals or plants, and I am told the urinals in the mens toilets are, um, slightly unusual too. (Unfortunately there were too many people around for me to pull out my phone and take photos!) Currently on the second floor is the Dali exhibition. This was initially meant to only be at the d’Arenberg Cube for three months, but was extended until May 31st 2020. (As of Dec 2020,  the exhibit is still showing due to the Covid-19 disruptions, and does not appear to have an update on their website yet.) There are many bronze statues designed by Salvador Dali, including some showing his signature “dancing clocks”. There are also quite a few prints of his too. All pieces are for sale, and as they are sold, more are being added in their place so the variety of pieces is changing over time. Some of the Dali statues on display One of my favourites “Woman of Time” About $40,000AUD if you would like to buy her

There were also some paintings by the Australian artist Charles Billich which I quite liked too. Some of the paintings on display by Charles Billich

While we did not eat here during this visit, it’s definitely on the list for a special occasion at some point in the future. The restaurant is open for lunch only from Thursday until Sunday. The only option is a degustation menu that changes with the seasons and is definitely not on the budget end of the scale. The food is innovative and matched with either standard or premium wines. The restaurant has won numerous awards in the 18 months it has been open and has been given 2 chefs hats in the Australian Good Food Guide.

NOTE: Due to Covid-19, the restaurant is closed. I have heard that it will not be re-opening at this stage, but I will leave this here for now until the situation becomes more certain. Finally you will arrive at the fourth floor, and here is where you get to taste all the wines! Well, maybe not ALL the wines, there are over 70 different ones, but some of the wines. We only tried a small selection as we were driving, but gosh, you could spent your whole day here just tasting these wines. We ended up walking away with a bottle of a premium red wine, a 2006 The Coppermine Road cabernet sauvignon. The new release 2016 The Dead Arm shiraz was quite nice too. We only tried two white wines, and I would happily buy the 2018 The Broken Fishplate sauvignon blanc. Yes, d’Arenberg do have quite unusual names for all their wines. The tasting bench is made of hand-moulded glass inlaid with vine leaves. There is a (digital) lady who does laps, her swimming silhouette passing along the bench. Three of the red wines we tried

While in the tasting room, make sure you duck outside onto one of the little balconies to take in the views over the McLaren Vale region. On one side you can see the sea, and on the other the hills. I visited in winter so there was green as far as the eye could see. In summer the vista will be much browner in general, but the green of the leaves of the grapevines will stand out. The view towards the sea

Around the d’Arenberg Cube

After visiting inside the Cube, there are also some other things to look at once outside. If you purchase wine, you will need to go to a nearby building – which is a converted old stone building – to pick it up. On the way there is a small carnival tent filled with old circus games to have a look at. There are art installations all around the cube. The stone building on the right is where purchases are collected. Down the driveway are some more quirky pieces of art. There is a band made almost entirely our of old rubber boots, and two hands coming up out of the ground that represent the four generations of the Osborn family. A band cobbled together from old rubber boots The second is the more casual Polly’s Wine Lounge, where you can get a casual meal including delicious platters, and wine by the glass or bottle. You can enjoy these nibbles outside on the lawned area taking in the view over the McLaren Vale vines. Along with just a standard tasting, there are many different experiences available during a visit to d’Arenberg. I was intrigued to watch one of the blending masterclasses that was happening in a side room of the tasting area. Not only do participants learn about some of the types of wines, they get to blend them together, create a label and take home their very own bottle of wine. Sounds pretty cool to me and I’ve put this on my Fifty Before 50 Bucketlist. The d’Arenberg Cube is open from 10:30am until 4:30pm seven days a week, closed only on Christmas Day and New Years Day. bookings are essential for groups of more than six people. The restaurants all have their own times, so please check them individually, You will also likely need a reservation for d’Arry’s Verandah Restaurant.

Entry to the d’Arenberg Cube is $15. Extra exhibitions may cost more. At the moment entry into the Dali Exhibition is an extra $10. Entry to the Cube is included with any restaurant booking, experiences or special tastings and if you purchase two or more bottles of wine, $5 of your entry fee will go towards that.

Top tip: Download the d’Arenberg app to give you more information as you look around. Search for “d’Arenberg” in the app stores to find it. Available for both iOS and Android phones. 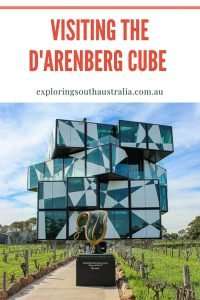