With over eighty cellar doors, the Barossa Valley has plenty of places to go wine tasting. There are wineries here that are not just well known in Australia, but known all over the world, such as Penfolds, Jacobs Creek and Wolf Blass just to name a few. While these big wineries are great, why not choose to instead visit one of the Barossa Valley wineries you’ve never heard of? The wines are just as good, the tasting is often more personal and you can enjoy trying something you can’t buy in restaurants wherever you go.

Of course you may have heard of these wineries, but as someone who has visited the Barossa Valley dozens of times over the years, these wineries were all new to me during my recent visit. Most of them I have never heard of before either. Some we stopped in on a whim as we were passing, others were recommended to be by locals (I often ask when doing a tasting which other wineries they would recommend), and some were recommended by readers in my Facebook group. I have this many again already saved for next time I go back and visit too.

With over 150 wineries and 80 cellar doors, there is of course no way I could cover all of them in a long weekend. Here is just a small selection that I hope to add to in the future. If you would like to suggest a winery I should visit, please comment below. I had never heard of this vineyard. We were driving along Seppeltsfield Road and liked the look of the cellar door so pulled in for a taste. It was cold outside, and I was delighted to find a cosy tasting room with an open fire.

Greenock Creek have only red wines, which is almost to be expected in the Barossa Valley. They have a lovely straight Grenache with is not so common and a Mataro, which I was assured was becoming more and more popular in the region so we would likely hear more about it in the future. Then there were the standard Shiraz varieties. We tasted 5 wines for $10 with the fee to come off any bottle of wine. We also chose to taste two premium wines for another $15 – this would be deducted if we purchased two bottles of wine. Buying two bottles was not a stretch as this was one of the few places I have ever been where we both liked every wine available for tasting. We didn’t take home the flagship Shiraz (it was tempting though!) instead settling for a middle if the range 2018 Alice’s Shiraz. David is actually the brother of the well known wine maker Peter Lehmann. This is a small-batch winery and has a much more modern and funkier feel to it. The wines are often named after his family (including the dog!) and the labels tend towards the risqué. There is some lovely outdoor seating with sweeping views over the valley, but we picked the seat right next to the fire since it was that kind of day.

There are two options for the tasting – for $5 visitors can taste five of the base range of wines. For $10 its also five wines, but they can include the premium wines too. The tasting fee is waived if and wine is purchased. The tasting starts though with some Golden Scrumpy, a light sparkling grape and apple cider. This is really yummy! We tried two of the white wines, a Chardonnay and a Semillon. These were probably our favourites over the reds to come. The first red wine was a Grenache Noir, made from some 100 year old vines. We then tried the premium Shiraz and Cabernet Sauvignon. The latter two both needed more time, but all three were decent wines.

I really enjoyed our tasting here. The atmosphere was lovely and even though we had the prime seats inside, we were not rushed and were able to linger over our wines. Our purchase ended up being a six pack of the Golden Scrumpy, for something a bit different. to add to our overflowing alcohol stocks at home. Turkey Flat are probably not as unknown as the other wineries here, but they are still a small winery that you won’t find everywhere. They only make (relatively) small batches of their wines, and they proudly sell out of them almost every year, so they are the kind of place that if you like their wines, you need to be on the mailing list or you may not get them.

There were again two tasting options here. The first was for $10 and included four wines of your choice. For $15 all of the wines (at least nine wines) could be tasted. The down side of the premium tasting was this did not come off the cost of a purchase whereas the $10 tasting it did. We chose to taste everything. The tasting here was interesting, because we were given two wines at time to try – for example the 2018 & 2019 versions of the same wines. There were some interesting options, including a Quinquina, a type of vermouth served with soda water and pink grapefruit lemonade. We ended up taking home a sweet desert wine, a Pedro Ximénez, which I’ve only every tried once before at Wynns in the Coonawarra region. First Drop Wines weren’t initially on my list of the wineries we would perhaps visit during our weekend in the Barossa, but once I spotted the cellar door I knew we had to stop in. The building stands out a mile, and I can’t believe I had not been drawn in before. The cellar door combines a tasting room with a tapas bar in one of the buildings that was previously part of Penfolds distillery and is now called the Provenance Barossa Precinct. It has a funky modern feel while looking like it has stolen all the furniture from your Grandma’s house. 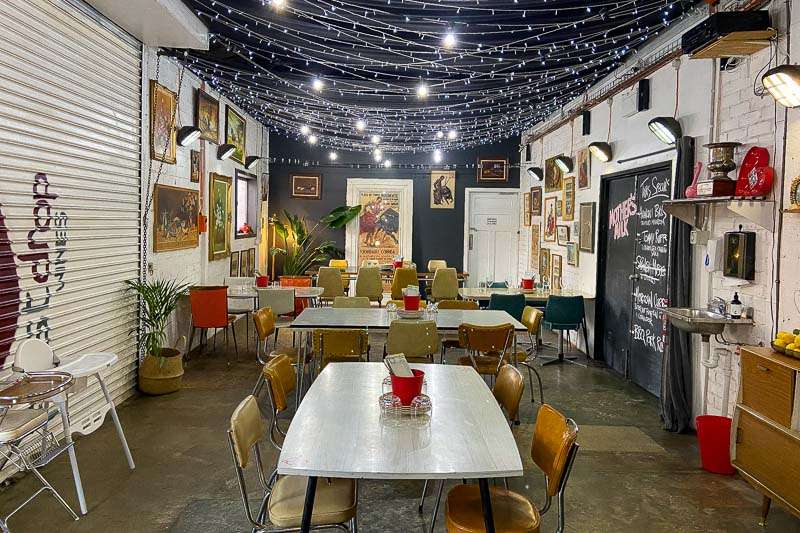 First Drop Wines do three different tastings. The first is the “Fun & Fresh” range which includes their popular “Mother’s Milk” Barossa Shiraz. There are nine wines to taste for $5. For $10 you can taste all of those plus four more Reserve wines. Both of these tasting fees are refunded if purchasing a bottle of wine. The third tasting includes the previous wine, plus up to seven single vineyard and museum wines. This tasting is $25 and only refundable on purchases over $300.

We chose to do the $10 tasting, but skipped a few of the wines (it was early in the day!). The interesting thing about First Drop is that the source their grapes from the Barossa Valley, McLaren Vale and the Adelaide Hills so they have a much wider range of styles than is found elsewhere. They specialise in Italian, Spanish and Portuguese. With all those different varieties to chose from, we still ended up taking home one of our favourites a Barossa Valley shiraz! Rusden Wines has a more traditional cellar door, an old cottage filled with lots of timber, an open fire, and if the weather is nice, a beautiful garden to sit in too. I have to admit, I met up with a friend here so spent more time catching up with her than learning fully about the wines. There were some new varieties I had not heard of before though such as a Chenin Blanc and a Cinsault. The tasting at Rusden Wines was $5 and was refunded from the cost if wine was purchased. The whole range could be tasted, except for their Sandscrub Shiraz – which retails at $390 per bottle. I guess if you were going to buy one, and they already had a bottle open they might give you a small taste. We took home a “Ripper Creek” Shiraz/Cabernet blend for a much more budget friendly price. Located south of Tanunda near Rowland Flat, Liebichwein is a tiny family owned vineyard. As you approach, it really is like to are heading into the back shed to taste some home made wine by a friend or family member. While the winemakers themselves were having a well deserved weekend off during our visit, we instead had their daughter talking about the wines, the history of the winery, and helping us to taste a large range.

This wine-making family is one of the oldest in the Barossa, going back over one hundred years when Benno Liebich started Rovalley Wines. In the 1980s, the family instead started Liebichwein, specialising in fortified wines as well as some fabulous reds. The cellar door is only open Friday to Monday and you will get a very personal experience if you stop by here to do a tasting. There are two different tastings available. For $5, visitors can choose any five of a range of the non-premium wines. For $10 all of the wines are available to try. This price is reimbursed with the purchase of at least one bottle of wine. We tried a range of the wines, but there are so many that we did not try them all. There are some interesting wines here, including a Pinot Noir – not something the Barossa is usually known for. We also tried a section of the fortified wines too. In the end we took home the Leveret Shiraz. It seems like no matter how hard we try, it’s still the shiraz we prefer in the Barossa. This is a bigger, more well known winery in the Barossa Valley, but it is still family owned. I had not been here before and really enjoyed our tasting so thought it would be a good addition to our list. The Kellermeister Cellar Door is located right at the southern end of the Barossa Valley, just out of Lyndoch. They have won numerous awards including the World’s Best Shiraz in the 2012 London Wine Show, so we figured they must be okay.

Tastings here are free (yes, FREE!) unless you would like to try their two premium wines, then it’s a $20 charge for those two. This was another tasting that I really enjoyed because the staff member was knowledgeable, friendly and engaging. He didn’t just go by the book, pouring wines in the order they were listed, but often poured two wines side by side so that they could be compared, sometimes out of the traditional order. We enjoyed all the wines, particularly the premium “The Meister” Shiraz. Our budget didn’t stretch to the $250 price tag this visit, so instead we took home a Pious Pioneer Shiraz, and for something different, a 2011 Aged Riesling.