The Hidden Coastline of Whalers Way The Hidden Coastline of Whalers Way is a guest post written by Chris from Chris & Laura Travels. Chris and Laura are Australia’s Top Australian and Canadian Adventure Travel duo. A real couple doing cool stuff in a responsible way. They want people to have thrilling and beautiful experiences, that keep them excited, curious and connected to life itself.

No other place in South Australia surprised us more than finding out about a secret, private park known as Whalers Way.

Hidden from the main road, locked behind a closed gate and far enough away from the public eye that you find yourself immersed in natural, untouched and peaceful nature, Whalers Way is the perfect place to set up camp for a few days and explore the ubiquitously harsh coastline of the Great Australian Bight. Most who discover Whalers’ way do so either by accident or word or mouth. It was the least discussed park we had heard of and came onto our radar by way of visiting the Port Lincoln tourist information centre, where we suggest you begin your Port Lincoln adventures.

Others stumble across this hidden beauty through their travels of exploring Port Lincoln and beyond. Asides from the obvious great White shark cage dive and seal swim in the bay, Port Lincoln has held the buried treasure of Whalers Way for a long time.

Privately owned and operated since 1887, Whalers Way land has been allowing access to the general public for a some time, and is most easily accessible by paying for and picking up a key from the tourist centre, or purchasing a pass online for $40 and receiving a key code to access the lock at the gate.

How Long Can I Stay in Whalers Way?

Your first nights pass gives you access to the entire park, as well as a first nights stay. With over 14 different camp sites and viewpoints to visit, there’s a fair amount to see and do in whalers way so we would recommend staying at least 2-4 days if you enjoy taking your time. If you look at a map of Whalers Way you will soon come to realise why it’s named so. The entire structure is anatomically shaped similar to that of a whale’s tail; albeit a fat whale.

From the entrance of the park almost instantly gives you access to your first, and in our opinion unrivalled access to the sheer power and beauty of the southern oceans great australian bight.

On the topic of the Bight, once again if you look at a map of the southern coastline of the whole of Australia you will realise it appears as someone (or something) has taken a ‘bite’ out of the country..hence the name

The Swimming Hole is your first glimpse at nature. A small, sharp track accessible via car leads you to an enclosed steel ladder bolted into the side of the cliff where you can traverse down and follow the path to the swimming hole.

A small rockpool that has formed from the crashing waves leaving a sun-soaked ocean pool; whereas on the other side is a harsh and often dangerous crashing of waves against the cliff face. It’s not advised to venture beyond this point as freak waves are known to suddenly appear and take you out to sea.

To the south-east corner of the park lies Cape Wiles, an absolutely beautiful lookout that sits on top of a cliff offering a higher than normal vantage point over the cliff face and rocks below.

If you have your zoom lens handy or a set of binoculars you will make out distinct black shapes moving on the rocks below. This is of course a colony of Australian Fur Seals that seek refuge from the waves and the predators of the deep blue in favour of sun bathing and a tan. 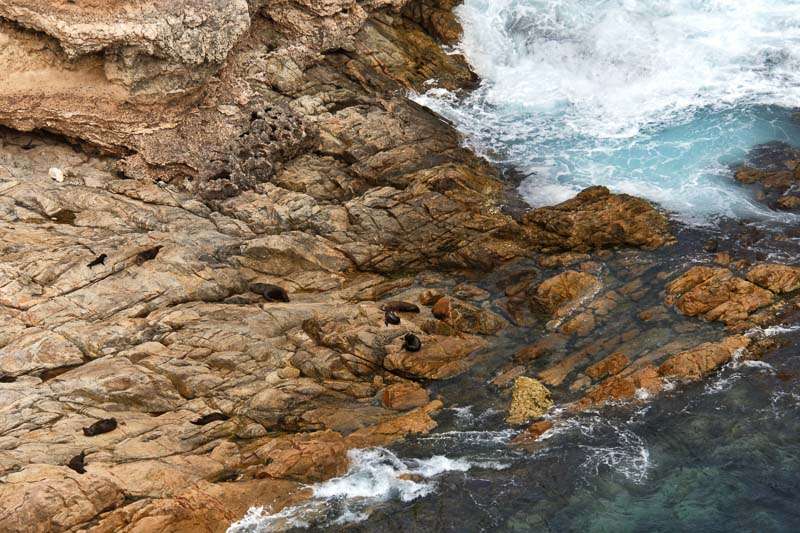 Less than 3km from the swimming hole (as the crow flies) and a steep and rocky descent with your car to the bottom makes this a very easy viewpoint along your journey of Whalers Way.

The great thing about Whalers Way is that there’s entertainment at every viewpoint. All along the southern region of the park are gravel turn outs that lead you almost to the cliffs edge and require you to walk for the best views. We recommend having a vehicle capable of tackling dirt and sharp gravel roads.

Other points of interest along here include Blue Whale Bay, Moonlight Bay & views of Groper Bay.

We hired a van back in Melbourne when we drove across and it held up pretty well, though it did makes us nervous at certain times so for the best peace of mind a four-wheel drive is the gold standard here (and a spare tyre)

Our second most favourite point of the park was the only place we decided to stay the night and is all the way far south-west at the Blowhole and Baleen rockpools. One of the best things to do in Whalers Way is park your car in the blowhole car park located at the bottom end of the trail. It’s most easily noticed by the sign at the cliff’s edge that reads ‘do not pass beyond here- freak waves have killed 6 people’.

There are two sections to this area, the first being the Baleen rockpools – a large collection of naturally carved rock pools formed once again by the harsh waves that continuously pound against the coast.

The Baleen rockpool is located a little ways down the cliff around 50m before the cliff drops off into the ocean. As beautiful as it looks its neither safe nor secure at any time of the day to walk down and visit and should only be admired from a distance unless you have a helicopter on standby.

The not so friendly cousin of the rockpool is located to the right and is an incredibly stunning visual display of shooting water best viewed at sunset. We chose this rather large roundabout car park to be our home for the night, albeit very windy and at times scary (as we were the only ones in the carpark) it was one our best and only nights within Whalers Way.

The ‘suburb’ of Whalers Way is Sleaford and one main road called Whalers Way road connects the entire park. To get here, follow whalers way road as far west as you can and turn left at the signs towards baleen rockpools and the blowhole just before the roundabout.

As you leave the blowhole heading back up towards the entrance there’s a small sign on the left that reads The Caves and Old Whalemans grotto. Follow the sharp rocks down the boulders to the water’s edge and on your right hand side are massive caves dug out of the side of the cliff over thousands of years of erosive formation.

They continue for quite some time hugging the coastline towards Red Banks beach, a track only accessible by 4WD. In the distance you will see a large windmill farm that rides the southwest coastline of the Eyre Peninsula.

In between Red Bluff beach and old whaleman’s grotto is the Theakstone Crevasse that’s definitely worth seeing if you decide to travel that far.

Things to Know About Whalers Way The entirety of the road that leads around the track is unsealed with certain parts a bit more tricky to manoeuvre than others so I recommend that you grab yourself a sturdy and 4WD capable car.

Another reason for this is that there is also no reception within Whalers Way, hence getting a tow truck will be very difficult and when you can organise it..also very expensive!

Whalers Way is largely unprotected and unsheltered from harsh weather conditions all year round, so making sure you have appropriate clothing for the occasion is crucial.

If you plan a trip down South Australia and want to travel the roads less ventured then Whalers Way is the perfect place to plant yourself for a few days, not foregoing other beautiful parks like Lincoln National park, Coffin Bay national park and of course the rest of the Eyre Peninsula.