Wherever you go in the wheat belt areas of Australia (mostly towards the south) then you will see grain silos towering over the surrounding landscapes. These concrete behemoths were forever present in my childhood. They were always the first thing we would see of our destination or hometown when travelling, and excited chants of “I can see the silos” rang through the car. But while we might have been excited to see them as kids, in reality they really are a bit ugly. That’s all changing now though, as towns realise they are a huge blank canvas just waiting to become a magnet to convince passing traffic to turn in off the highway. Now they are the backbone of the silo art trail South Australia.

At the time of writing there are currently seven sets of silos in South Australia that have been painted. I know of two more currently in the planning stages – at Owen in the mid-north, which is currently set to be painted in February 2021, and Eudunda, which is still in the discussion phase – but I am sure more will pop up in the next few years. I will keep you updated as soon as I can get to them to visit. The silos at Coonalpyn were the first set to be painted in South Australia. Brisbane artist Guido van Helten painted five of the local children onto the silos in 2017. They took 200 cans of spray paint and about a month to paint. Located on the Dukes Highway, the direct route between Adelaide and Melbourne, the silos are now a great drawcard. If you are leaving from Adelaide, it’s a perfect stopping place to stretch the legs, grab a coffee and admire the artwork, two hours into the journey. To see all of the children, take a walk around the silos, but take care, as they are still operational and at certain times of the year will have a lot of truck traffic as they drop off grain. This one is probably my favourite of all the silo art in South Australia, and it’s definitely the one I visit the most as I pass through Wirrabara regularly. It’s not easy to see though, you will have to look out for it and drive off the main street to find it.

This great painting of a woodcutter and a red-capped robin is by a prolific street artist called Smug. It was completed in October 2018. The 28m high mural was the first Smug had done on a silo, and took him about three weeks to complete. The trees in the background depict the nearby Wirrabara Forest, where the woodcutters used to work and the native birds live.

Smug has done amazing work all over the world, and in South Australia can also be seen on a wall in Tumby Bay, and in the streets of Port Adelaide The Waikerie silos are the first to have been painted on both sides. There are two distinct structures and they can be viewed not only from the town, but also from the nearby Murray River. The silo art is themed “Healthy River, Healthy Community” to show how essential the river is to the lives of everyone in this area.

Two artists were chosen for this project, Jimmy Dvate and Garry Duncan, who did a silo each, with Jimmy’s silo focussing on the local plants and animals while Garry has created a quirky river landscape. Painting the silos took 16 weeks and 500 litres of paint were used, and they were finally completed in March 2019.

Love street art? How about silo art? Here are all the locations in South Australia to see this beautiful artwork #siloart #southaustralia #siloarttrail Click to Tweet

Kimba claims to be the halfway point across Australia on Highway One, and I have to admit, while I’ve driven through it many times I don’t remember ever stopping – until I stopped to look at the silo art. We then had a bit more of a look around the town, and there are a few things here in Kimba worth seeing. I would even suggest using Kimba as a place to overnight when travelling in the area. This is what having a huge piece of artwork on the silos is doing for these country towns that are just another stop on the highway.

The Kimba silos were painted in late 2017 by Melbourne artist Cam Scale. This amazing piece of artwork is 60 metres long and 25 metres wide, making it one of the biggest silo art projects in Australia. It’s depicting a young girl in a wheat field, like so many surrounding the town, and took three weeks to paint.

The Kimba silos are also great to view if you are passing through at night time as they are permanently lit up for travellers to enjoy at any time of the day. Tumby Bay started its foray into becoming an art town in 2018. The silos were painted by Argentinian artist Martin Ron, who spent some time in the town taking photos of locals, activities and attractions before deciding on these two local boys jumping off the Tumby Bay jetty into the sea.

At the same time the silos were being painted, the first Colour Tumby Street Art Festival was taking place. Eight walls across the town were decorated with murals. The festival has become an annual event, with many more walls now festooned with amazing street art murals that make driving into Tumby Bay as essential part of a road trip in the area. The Cowell silo art features local legend Lionel Deer, pictured with his camel Diamantina, who have been regulars at the local Christmas parade for over thirty years. Also on the silos is one of the ringneck parrots that are found in the area.

Painted by Byron Bay artist Austin “Nitsua” Moncrieff, the silos were completed in September 2019. Nitsua was assisted by Michael ‘Schmick’ Motteram-Smith, who has also done a mural of his own at the nearby sporting complex. The Karoonda silos feature the local mallee trees that this area is known for, combined with sheep and a working kelpie, perfect representations of the industry in the area. Painted my Heesco, these silos took a little over a month to paint and were completed in July 2019. These were Heesco’s third set of silos, with previous work done interstate at Grenfell and Weethalle.

In an Australian first, as the sun sets these silos turn into another type of canvas. An ever-changing light show is projected onto them. With local photographs, Australian artworks and other exhibitions, each time a traveller passes through there will be something different. Farrell Flat is one of those tiny, blink-and-you-miss-it towns. Even though I have lived in South Australia pretty much my whole life, for a little while less than 100km away, I had never heard of Farrell Flat until I saw that it had some new silo art. Co-incidentally I was in the area the day after it was completed so made a point to stop in. According to the local publican, we were the first visitors to come into the town to check it out, aside from those people who were promoting it! Little did they know…

Completed in November 2020, the Farrell Flat silo art was painted by Jarrod Soden, and the artwork reflects the history as a stop on the former Peterborough rail line.

Some towns don’t have silos, or perhaps they just prefer to paint something slightly smaller, so water towers are becoming another popular town canvas for some amazing artworks. The Kadina water tower has a lovely mural of a young girl holding a piece of copper and a sheaf of wheat, both in recognition of the industry in the area. The reverse side of the tower is decorated with a train, since it is located opposite to the former train station. The mural was painted by Resio and completed in 2018. The Snowtown water tower is a tribute to John Hansen, a local who has been a CFS volunteer for the last 25 years.  The reverse side of the tower includes more local volunteers and twon sports stars. It was painted by artist Vans the Omega in 2018 in the hopes of starting a more positive reputation for the town. Snowtown has been unfairly tarnished through no fault of it’s own by what became known as the Bodies in the Barrels murders. Call past to see the water tower and the nearby “Big Blade” – a blade from one of the nearby windmills – and grab a coffee and a snack to help get this town back on it’s feet.

The country towns in South Australia are nothing if not resilient and inventive. When times are hard – as they invariably are in small farming communities now – they come up with some great ideas to attract visitors. I couldn’t leave this post without mentioning another great way to use what they have. Instead of painting the silos, the township of Quorn has taken a leave out of Karoonda’s book and in April 2020 started a nightly light show. As the sun goes down the silos come to light. While the displays are intended to change over time, during my visit they consisted of photos of some of the local trains of the Pichi Richi Railway, photos of the Flinders Ranges and surrounding area, photos of native flora and fauna, local events, and artwork done by local artists. The show lasts for about three hours after sunset.

The below map shows all the locations discussed above. While there is not an official South Australian silo art trail, it is easy to put together a road trip to see them all – and many other great things in SA.

Need to rent a car to see all this amazing silo art? I use and recommend RentalCars.com
Click here to check price and availability to suit your needs

Please share with your friends and pin for later 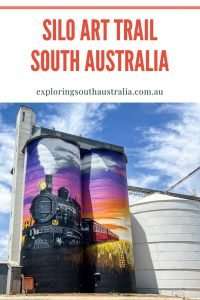 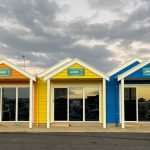 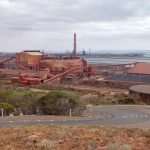 Things to do in Whyalla 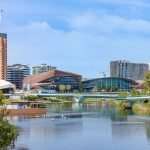 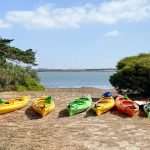